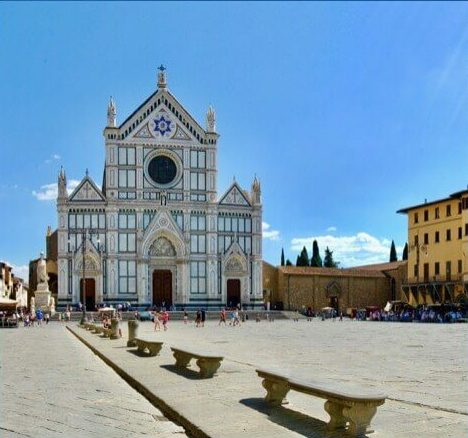 Lorenzo the Magnificent’s idea was to set up a “magical” place in Piazza Santa Croce that would recreate the face of an “ideal city”, so happily conceived by the artists of the late fifteenth century.

On May 3, 1863, amidst the sounds of bells and marches sung by musical bands, the tarpaulin was lowered to present to the citizens the imposing facade of the Basilica of Santa Croce, a treasure chest of artistic treasures and the Florentine Pantheon: a worthy achievement to give the homonymous square the value and majesty for which it was designed.

Lorenzo the Magnificent’s idea was to set up a “magical” place in Piazza Santa Croce that would reproduce the face of an ancient Rome, the “ideal city”, so happily conceived by the artists of the late fifteenth century. With the death of the Magnificent, the project declined but still today the secret symbols of a “golden” era remain imprinted on the facades of those historic buildings, which saw royal processions, historical games and spectacular horseback tournaments alternate in the large square. whose realization was able to astonish for the originality of their hermetic message.

The visit is itinerant and will take place inside and outside Piazza Santa Croce. We will focus on the facade of the Basilica (with its alchemical symbols) and on the bell tower; we will talk about the Medici era (parades, tournaments and football in costume); we will go and observe the alchemical symbols on the facade of Palazzo Cocchi Serristori and those on Palazzo dell’Antella. Finally the visit will end in Piazza Peruzzi.